By adapting the 3D general circulation model DYNAMICO developed at LSCE to the study of exoplanets, we have shown that the unexplained radius inflation of Hot Jupiters is the result of the long timescale meridional circulations that heat up the deep… Read more › 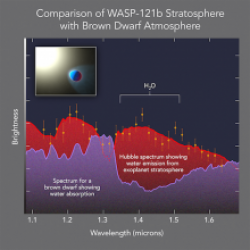 Image © NASA, ESA, and A. Feild (STSci) Exeter University Press release: Scientists have found unmistakable evidence for a stratosphere on an enormous planet outside our solar system, with an atmosphere hot enough to boil iron. An international team of researchers, led… Read more ›

HAT-P-26b: A Neptune-mass exoplanet with a well-constrained heavy element abundance

A correlation between giant-planet mass and atmospheric heavy elemental abundance was first noted in the past century from observations of planets in our own Solar System and has served as a cornerstone of planet-formation theory. Using data from the Hubble… Read more ›

Advection of potential temperature in the atmosphere of irradiated exoplanets: a robust mechanism to explain radius inflation

The anomalously large radii of strongly irradiated exoplanets have remained a major puzzle in astronomy. In this new ApJ paper, based on a 2D steady state atmospheric circulation model, the validity of which is assessed by comparison to 3D calculations,… Read more ›

The admitted, conventional scenario to explain the complex spectral evolution of brown dwarfs (BDs) since their first detection 20 years ago has always been the key role played by micron-size condensates, called “dust” or “clouds,” in their atmosphere. This scenario,… Read more ›

In a letter published in ApJL, we improve the current understanding of the atmospheres of brown dwarfs, especially cold ones with spectral types T and Y, whose modeling is a current challenge. Silicate and iron clouds are believed to disappear… Read more ›